Posted on September 14, 2011 by carolinefiennes

UK, I’d have more pounds than is given in both together. It’s a rubbish comparison. Here’s why.

First, they normally compare solely the US and the UK. As though there were only two nations on Earth. It’s just lazy. Do you really not think we might also be able to learn something from other countries too?

Third, do you not think there might be just one or two other relevant differences between the UK and the US? You’ll remember from school that good experiments test only one thing at a time and keep everything else constant. Well, the US and the UK are hardly alike in every respect other than their rates of charitable giving. Cultural differences are vast, differences in social norms are vast, the role of the state versus the individual differs vastly. Citing the differences in giving levels with no consideration of the umpteen other differences is just lazy / stupid – extrapolating from the (kind of) similarity of our language to everything else.

Fourth, it’s the role of the state, stupid. In upstate New York, I was amazed a few years ago to see a sign saying “the next 5km of highway is cleaned courtesy of the [wherever I was] Rotary Club”. In Britain, every km of highway is cleaned courtesy of the government, that is to say, by the tax-payer. And thus, magically, every km of highway is cleaned, irrespective of whether there is a local Rotary Club. Notice that money given by / to the Rotary Club of Wherever I Was to clean highways counts as charitable giving, whereas the money ‘given’ to the taxman to clean UK highways doesn’t. That doesn’t show that the US is more generous, as claimed, just that the US allocates tasks differently between the state and the private citizen. It’s not obvious that a system in which your local highway might not get cleaned (if, for instance, there is no Rotary Club) is better than one in which it definitely will.

Fifth, it’s not even true, as often claimed, that the US is more generous than the UK. According to NCVO / CAF, whereas 73% of UK citizens give money, only 60% of US citizens do[i]. Or another way of looking at this, official overseas aid giving by the US is 18 cents for every $100 of Gross National Income, whereas in the UK it’s nearly three times that, at 51 cents If you add together giving to international development by government and private individuals in the US, you get 25 cents per $100, whereas in the UK, you get more than twice that, at 54 cents[ii].

Sixth (yes, really), the uses of this ‘charitable’ money are not exactly what you would choose if you were an alien arriving on our inequitable and disharmonious planet. I read a report some years ago (and now annoyingly can’t find) that analysed the amount of charitable giving in the US which went to ‘communities of which the donor is a member’ – churches, synagogues, universities and so on. About a third, from memory, and enough to wipe out the per capita differences between giving in the US and the UK.

You see this most markedly in giving to universities in the US. Harvard University was 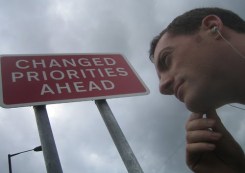 sitting on $37bn at the beginning of 2008[iii], almost all of which probably counted as charitable money. Is that giving supposed to somehow embellish the health of the nation, having great cashpiles sitting around in unaccountable institutions, managed by people paid $4.4 million?

And seventhly (a phrase I don’t think I’ve ever previously written) WHAT ABOUT EFFECTIVENESS? So bl**dy what if the US gives more if we haven’t established that they give it effectively? It’s not hard to give money in such a way that none of it does anything useful, and on the other hand, it is possible to give it just marvellously. A little given marvellously will produce more impact than loads given badly. The discussion about levels of giving is a measure of INPUT, not of the RESULT.

Please. Can we stop these nonsense comparisons and focus on what really matters: decent analysis which can help us to make the world better – by understanding how to make giving (and everything else) more effective.

[ii] From The Live You Can Save, Peter Singer, page 34